On Saturday afternoon, I participated in the panel “Into the Woods: How have forests shaped fiction?” with Navah Wolfe, Jennifer Mace, Sarah Gailey, and Seanan McGuire, and we had fun.

Future Worldcons should be held in a Tardis. Popular events could be put on a time loop so anyone could attend even if they conflicted with other events. More importantly, every room for panels, ceremonies, readings, or other events could be bigger on the inside than the outside so everyone would fit in.

As with some other Worldcons, space became an issue in Dublin. The convention was sold out at about 5,800 people, which was a few more than the Convention Centre Dublin (CCD) could handle. To accommodate that, the Spencer Hotel hosted children’s programming. The Odeon Point Square, a movie theater and unfinished commercial space almost a kilometer from the CCD, hosted the Art Show, book launches, acoustic concerts, craft workshops, art projects, displays, autographs, some panels, and the academic program.

Convention volunteers and venue staff did the best they could for crowd control cheerfully and efficiently. Despite the inconvenience, the snaking queues to get into events became good places to meet new people. 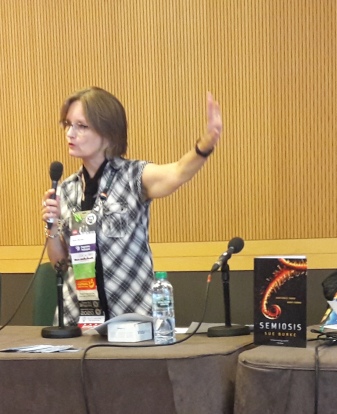 On Sunday afternoon, I gave a reading, specifically the opening of Chapter 6 from Interference, in which Stevland gets into an argument with a locustwood tree.

Other than that, the convention was splendid: well-organized and always on time. Events started at 9 a.m. with accessible yoga and a “stroll with the stars” morning walk, and ended in the wee hours at Martin Hoare’s Bar – known as Martin’s, named for the volunteer who was to be Fan Bar Manager but who died a few weeks before the convention.

The city of Dublin made visitors welcome with a good selection of hotels and other accommodations, convenient trams and buses, museums, sightseeing, restaurants, and bars. Like many people from overseas, I came early to tour the city and country, which was as green and beautiful as I’d been told.

During the Worldcon, thousands of tempting events vied for attention. I was drawn to panels, talks, readings, a couple of concerts, a medieval combat demonstration, a stand-up comedy show, and a dance; I wandered through the Art Show and Dealer’s area, perused displays and fan tables, attended parties, and spent a lot of time meeting friends from around the world. I could have also attended podcast recordings, plays, films, and workshops, gone on a treasure hunt, run through the park, and joined in role-playing or board games.

Convention organizers deserve praise for the volume, quality, and variety of programming, including some deftly made last-minute additions and changes due to crowds or popular demand. We never forgot for a moment the delight of attending an Irish Worldcon and being wished a hearty fáilte (welcome) at every turn. The convention newsletter, The Salmon of Knowledge, often included bits of local lore, such as the legendary origin of the Giant’s Causeway.

Like many people, I watched the Hugos in the overflow viewing area, the Second Stage, with the ceremony live-streamed on a large screen. The room had tables, a bar and a rapt audience. The ceremony, with charming and enthusiastic presenters, was marred only by a robot captioning system that we quickly learned to ignore after it turned Ada Palmer’s references to Lord of the Rings and Game of Thrones to “bored with the rings” and “cream of thrones” during her introduction to the Campbell Award winner. Of course there was a word or two by the evening’s recipients that ignited controversy, but that’s a feature of the Hugos, not a bug, and it seems to have accomplished something.

For me, one of the many highlightss of the convention came on Saturday evening at the Bright Club Ireland, a stand-up comedy show. Steve Cross made an obessively deep textual reading of The Hitchhiker’s Guide to the Galaxy to determine the exact date that the Earth is destroyed by the Vogons. (Listen to a version of it here on BBC radio.)

John Scalzi’s Saturday night “Dance Across the Decades” turned one of the CCD halls into a three-hour writhing, rhythmic celebration of fannish ecstasy. It may become legend. Its stomping, sweaty crowd no doubt broke at least three distinct safety regulations, but the CCD staff wisely turned a blind eye.