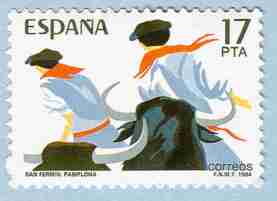 I was fascinated by the running of the bulls in Spain and never missed the live coverage of the run from Pamplona. When I learned one August that they run with the bulls in Leganés, a suburb of Madrid, I decided to go, and my long-suffering husband went with me. This is my report.

Few people got off the commuter train at Leganés. Few were on the streets — no surprise, it was dawn on a Sunday. We had a map and started to look for the city center, and soon discovered decorated streets — with piles of trash in the gutters that sparkled with the glint of crushed plastic drinking glasses.

We joined a surge of loud young people heading toward the run. Most were carrying cups of beer and bottles of oddly-colored Coca-Cola. Some of them were drunk, very drunk.

Many wore dirty, damp t-shirts, stained from drinks. The shirts were for peñas, the social clubs that organize events in fiestas. I had seen men on television the day before from the Peña de 19 or the Peña de Pepina talking about how they organized the run. How nice, I thought, these young people are helping out in the fiesta. That eventually proved wrong.

I spotted the truck delivering the bulls. People were picking their spots at barricades on the streets. There was a sharp turn in the route at the corner near the Telefónica office. In Pamplona, the turn at the Ayuntamiento is always a fascinating place. The Leganés turn had big plywood boards over the railings warning that there might be challenges to man and beast. So we staked out a spot.

Above us, a man sat on the railing, which was a good two meters high, chatting with his plump girlfriend. Eventually he jumped down and joined the runners waiting in the street. He was a slim young man in his early 20s with a red farmer’s scarf around his neck, an echo of people wearing red fiesta scarves. He jumped around, loosening up.

More drunks came past. Friends greeted each other, watched the runners prepare, and heckled them. A man behind the railing imitated a chicken. Runners got ready for their athletic adventure by smoking cigarets. One wore a soiled t-shirt, “”Que alguien me pare,”” Somebody stop me. A first-aid worker watched, standing on the railing, rubber gloves on his hands. A cop waited. A cameraman for Localia TV took pictures. From down the street came music, the Spanish national anthem. The minutes continued to pass.

Then the chupinazo boomed, the firework that announces that the bulls have been released. The runners jumped. They began running down the street — or ducked under the railing. The young man with the red farmer’s scarf leaped back to his spot above my head. We stood there, watching the bare street.

Soon, the thunder of hoofs approached, and the bulls ran past, thrillingly close, almost close enough to touch, black and handsome. And all alone. No runners in sight.

We began following the crowd down the street toward the bullfighting ring. We passed a lot of groups of people shouting and laughing, holding glasses of beer or bottles of odd-colored Coke. One man lay on the sidewalk, eyes closed, a placid look on his face, apparently overcome by alcohol.

We squeezed past an ambulance, and where people had crowded to look at what was going on. Someone was being put inside. A Red Cross volunteer spoke into a two-way radio. I learned later that a man had run without a shirt and fallen down on the rough asphalt.

That was the big injury. No bulls involved.

We passed a group of young people in a peña playing pop music at ear-shattering levels, and a few members danced in the street — actually, they stumbled around drunkenly. One man lowered his pants and wiggled lewdly. Another unzipped and began to urinate. Both were cheered by their friends, who were standing or sprawled on the sidewalk. I managed to read their t-shirts: Peña de Diez Años de Desgraciadas. The Club of Ten Years of Unfortunate Behavior.

We walked past the loud music and, finally, when we were out of danger of deafness, got a cup of coffee in a pastry shop. The people there were talking about the run. The woman who owned it took out a red fiesta scarf and played bullfighter with it.

A patron having his morning brandy told me, “”I don’t care much for the bulls, but something for everyone, right? The thing is, you shouldn’t run drunk, and a lot of people do. You need to be careful, and you can’t if you’re drunk. One mistake is enough.””

We continued on. It was 8:45 a.m. We passed another group of cheerful, noisy, falling-down-drunks, the Peña de los Guarros, the Club of the Swinish Louts. We decided to take a short detour through the heart of town, past the Plaza de España. Despite the recent hosing-down by Department of Sanitation, it smelled like an outhouse. Another drunk peña was blasting music across from a big church that somehow seemed to have worshipers despite the noise.

We returned to the train station and caught the commuter train back to Madrid. I had been to an encierro. Any good Hemingway-inspired writer in Spain ought to do that and report back about the courage, the drama, the adventure, the poetry, the miracles and tragedies, the metaphors of life and death, and the ultimate truths of humankind.

I did come away with something astonishing to tell the folks back home.

But I don’t think I will.