In December, online dictionaries and usage sites start announcing their words of the year. They base their selection on user interest and, as Oxford Dictionaries puts it, the “word or expression that is judged to reflect the ethos, mood, or preoccupations of the passing year, and have lasting potential as a term of cultural significance.”

I can only conclude that we live in troubled times.

Oxford’s word is toxic. It doesn’t get much worse than that: toxic chemical, masculinity, substance, gas, environment, relationship, culture, waste, algae, and air. Oxford explained its choice this way:

“In 2018, toxic added many strings to its poisoned bow, becoming an intoxicating descriptor for the year’s most talked about topics. It is the sheer scope of its application, as found by our research, that made toxic the stand-out choice for the Word of the Year title.” 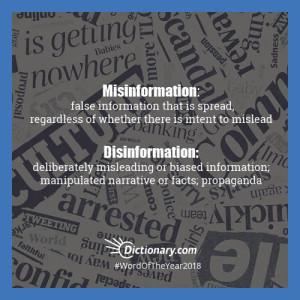 “The rampant spread of misinformation poses new challenges for navigating life in 2018. As a dictionary, we believe understanding the concept is vital to identifying misinformation in the wild and ultimately curbing its impact.”

CNN noticed Dictionary.com’s choice of misinformation and its previous words of the year for the last ten years. CNN news editor Brandon Griggs was moved to comment: “Sure, it’s impossible to sum up a year in a single word. But taken together, these nine words paint a pretty dark picture of the past decade.”

“Single-use refers to products — often plastic — that are ‘made to be used once only’ before disposal. Images of plastic adrift in the most distant oceans, such as straws, bottles, and bags, have led to a global campaign to reduce their use.” 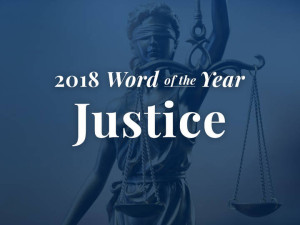 Merriam-Webster’s word also reflects our preoccupations: justice. “It was a top lookup throughout the year, with the entry being consulted 74% more than in 2017,” the dictionary’s editors said.

“The concept of justice has been at the center of many of our national debates in the past year: racial justice, social justice, criminal justice, economic justice. In any conversation about these topics, the question of just what exactly we mean when we use the term justice is relevant, and part of the discussion.”

The Merriam-Webster runners-up for 2018 included nationalism, feckless, and the “sometimes vulgar” noun pissant.

A few more dictionaries and word usage experts have yet to offer their choices for 2018. Brace yourself.

One thought on “Four words of the year for 2018: “toxic” “throw-away” “misinformation” and “justice””