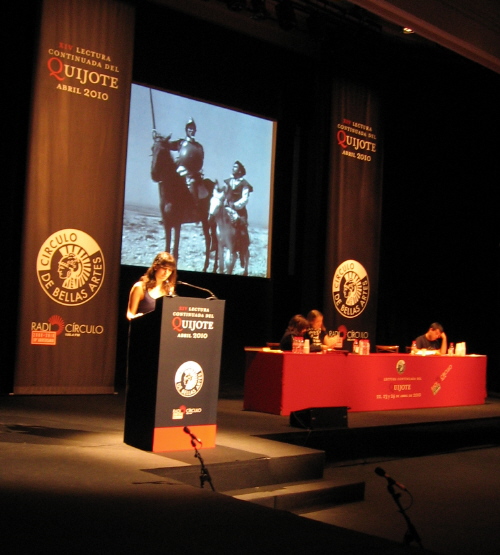 A high school student reads in 2010. Photo by Sue Burke.

Each year, to commemorate the official day of Cervante’s death on April 23, the Circulo de Bellas Artes hosts a Continuous Reading of Don Quijote de La Mancha. It takes about 48 hours. Celebrities, students, and volunteers off the street each proclaim a brief excerpt. I’ve volunteered twice.

I took part in the 12th Annual Continuous Reading of Don Quixote today.

It’s held in the Hall of Columns theater on the 4th floor of the Círculo de Bellas Artes, a cultural institution in downtown Madrid. Anyone can volunteer to read a few paragraphs, so why not me, despite my accent?

I went up to theater lobby, got my volunteer number, and went into the hall. About 100 people were inside, listening as one reader after another took the podium on the spare and dramatically lit stage. A monitor on a wall announced that they were reading from Book II, Chapter 18, which deals with what happened to Don Quixote in the castle of the Knight of the Green Doublet.

A camera crew filmed the reading for close-circuit TV throughout the building, and a radio technician monitored the live transmission on Radio Círculo 100.4 FM. A movie screen showed clips from movie adaptations of the book. An interpreter presented the words in sign language.

Volunteers came in all types and ages. Three men read their sections in Esperanto. Entire families read. Young children stumbled but bravely made it through their paragraphs. Don Quixote is a funny book, and some readers couldn’t help smiling as they read. Everyone got a brief round of applause when they finished.

My number came up. As the volunteer ahead of me read, I went to the table on stage to sign the log book, then got my assignment. I had time to read it through silently once before it was my turn to stand behind the lectern — just me, bright lights, and these words by Miguel de Cervantes:

(“Verily, Señor Don Quixote,” said Don Lorenzo, “I wish I could catch your worship tripping at a stretch, but I cannot, for you slip through my fingers like an eel.”

“I don’t understand what you say or mean by slipping,” said Don Quixote.

“I will explain myself another time,” said Don Lorenzo; “for the present pray attend to the glossed verses and the gloss, which run thus:

For the past 14 years, to celebrate the anniversary of Cervantes’ death (actually, his interment) on April 23, the Círculo de Bellas Artes of Madrid organizes a marathon reading of Don Quijote de la Mancha. Each volunteer reads a short portion of the work. I volunteered in 2008 and again this year.

I arrived today at the Círculo de Bellas Artes, a seven-story cultural center in downtown Madrid, a little before 10 a.m. on a warm, sunny spring day. The sidewalk and the lobby were bustling, and TV news crews busily recorded the scene. I recognized two prominent Spanish politicians on my way to fifth-floor Hall of Columns where the reading was taking place. April 23 is World Book Day, and a cultural center was the place to be seen.

I registered in the lobby outside the hall. Some readers and groups pre-register, and some like me walk in off the street. The volunteers handed me my volunteer-off-the-street ticket, Number 176, and apologized. “It will take a long time to get to that number, an hour, maybe more.”

One of them pointed out an electronic display board and explained that they were all over the building including the cafés. He said they would alert me when my number was coming up if I wanted to go relax elsewhere. I said I would enjoy watching the reading. He apologized again because the hall, with more than 100 seats, was filled to standing-room-only.

But I had read two years ago and expected all this. I went into the hall and found a comfortable place to stand. The brightly lit stage held a table and lectern. Above it was projected an old movie version of Don Quijote. At the dimly lit sides of the hall, technicians managed equipment for Radio Círculo and Instituto Cervantes TV, and staff organized the readers waiting to go on stage.

On the podium, high school students were reading the sonnets at the end of Part One with varying degrees of confidence as their friends in the audience snapped photos. Each volunteer read until the woman who was assigning the readings said “muchas gracias.” Then the reader stepped off the stage to applause, and it was the next volunteer’s turn.

At the start of Part Two, Chapter II, the Cervantes Institute connected to its Pekin branch, where three people active in Spanish literature – Dong Yanshen, Fan Hong Yu, and Xu Ying – each read a section. They spoke Spanish with good accents.

The reading returned to the Hall of Columns. A few VIPs slipped in among the students, along with some volunteers from the street. At the start of Chapter IV, Radio Círculo connected to the Madrid Women’s Penal Institute, where two inmates read.

At 11:15, my number came up. I signed in, and then sat next to the woman assigning the readings. She followed along in a large-print text as the person ahead of me read. When he reached the end of a sentence, she said, “Muchas gracias.” It was my turn.

The book on the podium was the same large-print edition. My section began with the words “Yo, señor Sansón” halfway down the page in the middle of a line. I found it and began reading with as much inflection as I could, though I was reading only a half-word ahead of where my finger was following the text.

I reached the end of the long sentence. “Muchas gracias,” the woman said, and I stepped down from the stage to applause.

I remained to listen to Chapter V. Most of the high school students had left. The Ambassador of Ireland read a few paragraphs; so did another VIP and a lot of ordinary people. 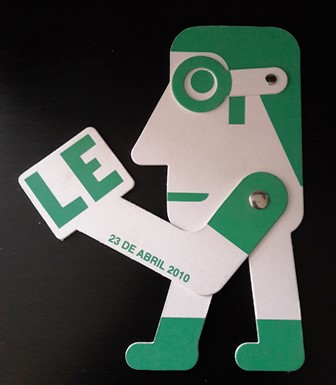 This doll loves to read.

When I left the hushed hall for the busy lobby, the Guild of Madrid Booksellers gave me a commemorative paper doll. Downstairs, at the even more busy main entrance, a television displayed someone reading from Chapter VI. Sixty-eight chapters remained.

Here’s the section I read:

(“…I, Senor Samson, don’t plan to earn my fame by being brave but by being the best and most loyal squire who ever served a knight-errant; and if my master Don Quixote, in consideration of my many fine services, is pleased to give me some island of the many that must be around these parts, I will take it as a great favor; and if he does not give it to me, I was born to suffer, and a man must not live depending on others, only on God; and what is more, my bread will taste as good and perhaps even better without a government than if I were a governor; how do I know but that in these governments the devil may have prepared some trick to make me trip and fall and knock out my molars?…”)