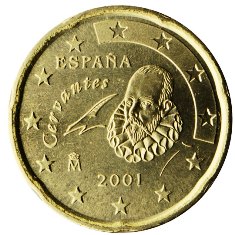 We’re living through historic times. Of course, we’re always in the midst of history, but the pandemic reminds us that this time it’s big — and not what we would have chosen.

I lived through a much happier big event almost nineteen years ago. The European Union was switching to the euro. At the time, I was living in Spain, and we were all excited. Rarely do average citizens get to participate directly in such a grand moment as the introduction of a new international currency involving fourteen European countries.

In late December of 2001, I got my first euros, a “starter kit” bag of shiny new coins purchased at a bank with Spanish pesetas, about 12 euros’ worth. I took them home and admired them with a friend: some copper-colored, some gold-colored, and some silver and gold bi-metal. They depicted King Juan Carlos II, Cervantes, and the Cathedral of Santiago.

At an exchange rate of 166.386 pesetas per 1 euro, the math stumped us a little, but lots of businesses were handing out cards with conversion tables. We were going to need the help.

No more would we use the peseta, which had served Spain for 133 years. No more peseta prizes would be offered in the El Gordo lottery, held every December 22. At the lottery drawing, the winning numbers and prizes are always sung, and in 2001, the audience began to sing along — singing goodbye to the peseta.

Euro-ready or not, nine days later, midnight struck! People lined up at ATMs on their way to New Year’s parties to withdraw the new cash. The Madrid subway system discovered that its ticket machines were not quite euro-ready and didn’t work with the new currency, so people got to ride free until that was fixed the next day.

Officially, the euro had existed as a non-physical currency starting January 1, 1999, so we’d had a long time to get ready. Despite all the preparations, on January 1 a waiter in France got confused and accepted a 5-denomination Monopoly bill as a 5€ bill: both are grayish, the same size, and have big 5s on them.

In Spain, we officially had until February 28 to shift over to the new currency, but it took only a few days. By law, we could pay in pesetas and get our change in euros, and that’s how we did it: people would buy a 100-peseta cup of coffee with a 10,000 peseta bill.

We all had to do a lot of math with the 166.386 exchange rate. For a long time I saw befuddled elderly people in stores helplessly holding out a handful of euro bills and coins to check-out clerks, who would pick out the right amount. The euro had cents, like dollars, and my husband had to teach our landlord how to write a check with decimals. I knew that the copper coins would tarnish soon like US pennies, but Spaniards were dismayed when they saw the pretty coins turn brown.

Yet even before the euro began circulating, problems had begun to surface. To avoid paying taxes on under-the-table earnings, many Spaniards kept significant savings in cash — suitcases full of bills. How could they exchange those for euros without paying taxes? They couldn’t, so they began spending the pesetas. One December 2001 advertisement for diamonds simply showed jewelry and the tagline: “Honey, the euro is coming and I don’t have a thing to wear.”

More problems with the euro eventually followed, especially after the financial crisis of 2008, a historic event that no one enjoyed living through. I prefer to remember those fun days eighteen years ago when we had bright new money in our purses and the knowledge that one day we would tell children, “I remember when I held my first euro coin.…”

Some day, I hope to bore children with the story of the excitement of getting my Covid-19 vaccination. Meanwhile, we’re all in a historic moment, and we can influence the outcome, at least a little. “Honey, the coronavirus is coming…”