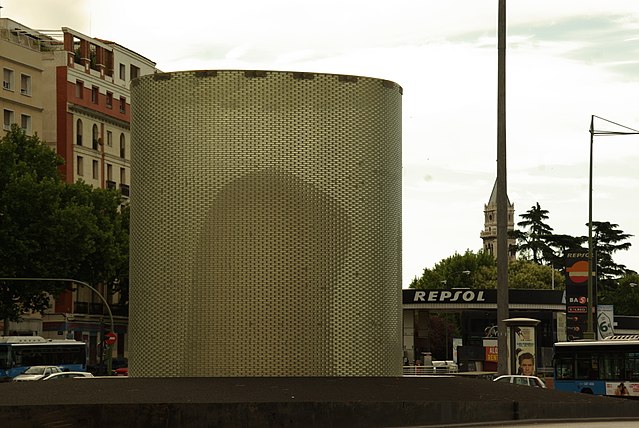 What happens after a painful crisis? Maybe one pain is replaced by another, but maybe it shouldn’t have to stay painful. I wrote this in 2007 when I was living in Spain.

We weren’t allowed to get close, and we weren’t happy about it. Several hundred of us had come to see the inauguration of the monument in front of the Atocha train station. It honored the victims of the Al Qaeda terrorist train bombing that had taken place at that station three years ago to the day, March 11, 2004. But the ceremony, we discovered, was by invitation-only.

Instead, we waited for an hour behind barricades two blocks away, peering down the slightly curved street, occasionally glimpsing movement. Police officers blocked our way, gazing at us with polite impassiveness. We were people from the neighborhood, witnesses to the sights and sounds of the attack in which 191 people had died and 1,824 were injured.

As is the custom in Spain, we passed the time by chatting among ourselves. Spaniards are champion complainers and never slow to offer an opinion, and the people around me believed that we were being kept away because politicians feared we might disrupt the solemnity of the ceremony by voicing a criticism — though we disagreed over which politician or political party deserved to be confronted, and a few heated words were exchanged.

Meanwhile, two blocks away, King Juan Carlos I and Queen Sofía presided at the inaugural, attended by a thousand family members of the victims. The somber, quiet ceremony was disrupted when a protest sign and an angry shout denounced officeholders in one political party, and, later, a few scattered shouts were aimed at the head of the other party as he left. After the ceremony, some of the families of the victims argued over politics even as people placed flowers at the monument.

In the three years since the bombing, Spanish politics have grown “crispada”: crisp or tense. When the bombs went off, the Popular Party (PP) was in power, but national elections were scheduled for three days later.

Al Qaeda had planned the attacks hoping to convince the government to withdraw its soldiers from Iraq. In fact, the opposition Socialist Party (PSOE) won the elections and promptly withdrew the troops, though it redeployed them to Afghanistan.

For the last three years, the PP has insisted that Basque terrorists were involved in the bombing, though there is no evidence for it. It has implied that PSOE sold out to the Basque terrorists in exchange for the election victory. The PP has organized huge protests against real or potential PSOE acts, and fascist symbols have occasionally appeared in those crowds.

PSOE has begun peace talks with the Basque terrorists, among other controversial policies. It calls the PP a hypocrite because, while it was in power, it practiced some of the same policies that it now criticizes. PSOE disdainfully accuses the PP of demagoguery, lies, and attempts to undermine democratic institutions.

Teenagers visiting the Senate were shocked by the heckling they saw during a session. “They’re like street gangs wearing designer-label suits,” one student said.

A senator from a regional political party complained, “The eye-for-an-eye strategy by PP and PSOE will wind up making everyone blind.”

Three years after the bombing, politics just keeps getting crisper. Perhaps only the presence of the King, who commands respect, kept order during the inauguration of the memorial.

After His Majesty and the politicians left, the police removed the barriers, and I and my neighbors streamed toward the monument. From the outside, it is a drab cylinder 11 meters tall made of glass blocks. We walked around it and climbed over the railing to peer inside with our noses pressed up against the glass.

The monument was made to look at from the inside. Visitors see it from beneath, and enter via the train station. First they pass a backlit panel with the names of the 191 victims. Then they go through a mechanized double doorway and enter a large room. The lighting is dim, and the walls, floor, and ceiling are cobalt blue.

In the center, a circular opening allows them to look up inside the monument, where an elongated, irregularly shaped plastic film bubble rises inside the glass cylinder. Printed on it are some of the messages that had been left as part of the shrine of candles, flowers, and hand-printed signs that sprang up spontaneously outside Atocha train station in the days immediately following the bombing. They appear in a variety of languages: the dead came from many countries, and they were mourned by people from around the world.

Beneath the monument, visitors stare up at the words printed on the plastic bubble inside. The words are meant to fly toward the heavens like a shout of hope from inside the train station. The room is isolated from the always-busy train station by a wall of thick, wavy glass. It is silent.

I remember the noise of the day of the bombing. I heard the bombs, and soon after, sirens that wailed non-stop all day. Three years later, during the inaugural, as we waited behind the barricades, my neighbors spoke of seeing the bloodied dead and injured transported through the streets. Those who live in the high-rise apartment buildings next to the tracks saw the survivors stumble away from the wreck of the train cars, their clothes blown to tatters.

We were hurt, too — not physically, but pained enough to feel drawn to the monument, hoping it would ease our memories.

In the first week following the inaugural, more than 40,000 people visited the monument. Not everyone liked it. Some called it cold, distant, unartistic. The plastic bubble inside looks flimsy. At night, lit up from inside, it glows bluish inside the glass block cylinder, and the whole thing looks a little like a giant lava lamp.

Meanwhile, the trial of 29 people accused of being involved with the March 11 bombing continues, and if convicted, their sentences could total 38,654 years in jail.

Portions of the trial are televised, the first courtroom proceeding shown live in Spain, and viewers have discovered that real life does not resemble television. Real lawyers do not act like Perry Mason or Ally McBeal. On the witness stand, the accused offer up selective amnesia and flimsy excuses rather than dramatic admissions of guilt. The police investigators are not as efficient as those on the series CSI. But Judge Javier Gómez Bermúdez has earned the nickname of “Judge House” because his irony and toughness remind viewers of a fictional television doctor.

At the courthouse, during recesses, smokers all crowd into the same smoking patio: police, lawyers, people injured in the bombings, and some of the accused terrorists, all within touching distance of each other.

The trial should be finished in July, if all goes as expected, and a verdict should be delivered in October.

Meanwhile, Spain remains an important target for Al Qaeda. In videos, terrorist leaders have threatened Spain because it has troops in Afghanistan and it maintains the cities of Ceuta and Melilla in Morocco. Bin Laden’s lieutenant Ayman al Zawahiri has spoken of recovering Al-Andalus, the Muslim califate that controlled much of Spain from 711 to 1492 CE.

Spanish intelligence agents say that Al Qaeda members have returned from terrorist training in Iraq with orders to attack.

This whole nightmare could happen again.