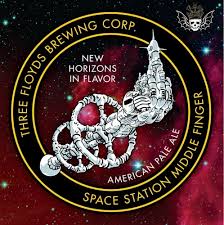 So much beer, so little liver.

You may have noticed a trend to give strange names to beer. (Wines, too.)

Does this help sell beer? Maybe the first purchase. I wanted to buy a six-pack and I saw Space Station Middle Finger. I like science fiction. It sounded like fun.

So I bought it, and it was a fine brew with a citrus-like tang, not as highly hopped as some American pale ales, and overall very satisfying. As I drank, I admired the artwork on the label, which could have appeared in an episode of Red Dwarf, and that was a pleasant thought.

Tasters at Beer Advocate also had a good opinion of the ale.

Would I buy it again? Sure. But wandering through a beer aisle or perusing a display cooler yields no shortage of tempting fermented adventures. A brand has to find a way to stand out. A strange name helps, I guess, but what happens when all the strange names are taken?