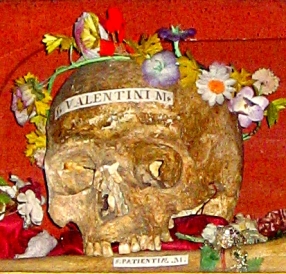 I took this photo of a relic of St. Valentine in Santa Maria en Cosmedin Church in Rome. I hadn’t expected such a find, and in fact there are many more similar wonders in Rome. This invites more thought about the purpose of relics, especially given my interest in the Middle Ages.

Goodness is transferable, according to the medieval theory of relics. And who doesn’t want to be good?

During the early years of Christianity, the remains of martyrs were frequently interred in church altars to lend their holiness and protection and to work miracles.

But in the Middle Ages, saintly remains, along with feathers from angel wings, griffin eggs, or slivers of the True Cross, acquired another power: they radiated a goodness force field that could forgive sins and improve souls. Everyone wanted to keep a relic near them to cut down their years in Purgatory, and collections grew in churches, monasteries, and royal chapel-museums. Frederick the Wise of Saxony, patron of Martin Luther, gathered 17,433 relics in a Wittenberg church housed in 12 galleries along the nave, where visitors could earn 128,000 years of indulgences simply by being piously present.

It seemed logical at the time. In those days, the world vibrated with spirits, magic, and divine intervention in a way that we in the 21st century may find beyond our understanding.

For example, the Black Death killed up to half the population of Europe between 1347 and 1351, a plague brought to Europe from the East by trade and spread by rats, fleas, and sneezes. At the time, some said it was punishment by God for sins, and prayer was the cure, but the College of Physicians in Paris said that the stars had battled the sun over India, drying out a great sea; the rotting fish had poisoned the air, and the poison had caused the plague. The College prescribed burning aromatic wood so its smoke would drive away the bad air.

Those were the days. The supernatural filled medieval life. Everyone knew that magical and divine signs and prophesies could come as dreams or natural phenomena, which were minutely analyzed. Statues wept and bled. A touch from a king or queen could cure diseases; so could the charm Abracadabra. A bit of blessed bread could keep away the devil and rabies. Those who couldn’t afford the rib of a saint or the horn of a unicorn could, at least, carry a rabbit’s foot.

Religious doctrines and medical science have moved far since those days.

Some churches still maintain relics because they believe them to be potential instruments for God’s miracles, but don’t expect automatic indulgences or magic just by being proximate to one. Modern science says that the bubonic plague is caused by a bacillus, and aromatherapy is not the preferred prescription.

But making fun of the past is not the point of this musing. History can teach us as much about ourselves as about others. The history of relics shows the extremes that people will go to and the things that they will believe in their search for goodness and health. And today, who doesn’t want to be healthy and good? What extremes do we take for it?

P.S. It’s also possible that St. Valentine is in Madrid, Spain, as this article by Felicity Hughes explains.