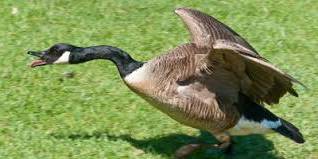 I’ve been thinking about writing a fantasy story in which the main character picks up a sickly young dragon and carries it home. Would that be possible? How much does a dragon weigh?

Google’s answers refer mostly to Dungeons & Dragons, where the dragons weigh tons, and that’s not my fantasy universe. I want a fantasyland closer to our consensus reality (the “real world” to Muggles). Dragons fly, and birds fly, so perhaps we could extrapolate dragon weight from bird weight.

Canada geese have a sort of dragon-like shape — and like dragons, they can be nasty. If geese could spit fire at us, I’m sure they would. Very roughly (for easy math) a Canada goose is 3 feet long from beak to tail, has a 5 foot wingspan, and weighs 10 pounds. A dragon 30 feet long with a 50 foot wingspan would weigh 100 pounds.

Even a dragon the length of a city block, about 300 feet, with a wingspan equal to the height of a 50-story building would weigh only 1000 pounds. A dairy cow weighs more. World champion weightlifters could pick up a skyscraper-sized dragon.

So … dragons are lightweights. That’s useful to know.

A friend has kindly pointed out that dragons have not merely length but depth and breadth — that is, their weight would increase by the cube square law.

Sorry. In my defense, a skyscraper-sized dragon that weighs as much as an African elephant is still relatively lightweight, even though we’d need a crane to lift it up (provided that the dragon is cooperative). Another thought: Would you want a dragon to land on the roof of your house?

One thought on “How much does a dragon weigh?”